I was out during the Sony PS4 Announcement conference, so only caught the odd tweet. I was then busy for the rest of the week. I finally managed to catch up late on Saturday. Obviously live-tweeting it at that point would have been pointless, but I couldn't stop myself writing down what I would have said. Obviously if you follow me on Twitter you know most of these will be sarcastic/trolling.


Here are my "tweets" [No, there's no timeline, use your imagination/memory!]:

- Intro too long, reminded me of things Nintendo used to do in 2000 - 2005 [like this & this]
- Their focus now seems to be "the gamer"? Something they stepped away from before.
- They really did build a PC... and how large is that harddrive? is it ssd? is this "suspend/resume" safe?
- Knack... looks neat but could've been done on PS3. Also has identity crisis, the dialogue parts during the trailer looked way too "serious".
- PS4 will gather details about how you play... so it'll become as annoying as Facebook? Also, who actually gets worthwhile recs from FB/Amazon/Twitter?
- Sony legalise piracy, thus proving it only has negligble effect on sales "only pay for the games you fall in love with"
- Gaikai having all games on sounds like a "suggestion", Perry says "phases"
- Sony has a unique ability to make game creators sound like twats.
- Assassin's creed and killzone crossover?
- What a crap explosion
- Guns followed by cars. More of the same.
- Have there been no team-based racing games before? Not a big fan so can't say...
- Car Porn #carporn #carporn #carporn
- Public service announcement about civil disobedience now... I think this guy's about to cry
- Oh, another Mario game. Sorry, INFAMOUS. Infamous... got confused.
- Looks like someone's already stabbed Jo Blo several times before he even got on stage.
- I'm liking the no-filler claims. Hmm, 25hrs...Oh it's Wind Waker HD again.
- I'm going to attempt not to say anything nasty about Cage...
- Old man face is good. [very very very costly to do that I expect tho]
- btw watching this on Wii U Browser (YouTube) is great 'cos you can glance at GamePad for a closeup :P.
- Media Molecule are geniuses [still mainly a publicity tool though]
- Hope they're not overworking Ono-san again.
- Hahaha, they mentioned Monster Hunter XD.
- Panta Rhei engine. Hmmm, if anything like MT Framework can scale down perfectly fine anyway, no need for PS4 "exclusives"
- "Deep Down"... #makeyourownjokes
- Seems to be a Little Inferno sequel...
- Can't think of much to say to S-E demo. Didn't like motion-blur.
- Longest non-announcement ever... "We're making a FF game"... ORLY?!
- Who holds a phone like that?
- Watch_Dogs still looks good. As long as all that's easy to do.
- So are ActiBliz going to be surprised when D3 doesn't sell millions on PS4?
- It's amazing that D3 runs well on PS3?... It ran well on mid-range PCs...
- 1 man & 3 body guards talking about destiny
- Is that it?

And here's the serious thing I did actually tweet once I'd finished watching: 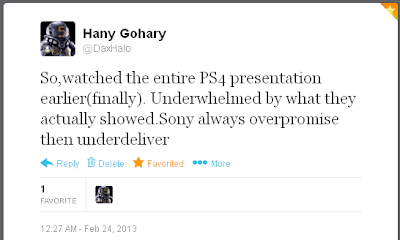 Thanks for letting me waste your time :).